Can art get under our skin?

In despair and grief over what these recent tragedies mean for our society, I hold out hope that the most creative responses can somehow cut through the idiocy that passes for most of the mainstream media coverage and  the racism and hate and ignorance and fear that seems to be flooding the interwebs these days.

First of all, check out #Alivewhileblack and then #crimingwhilewhite on twitter. Reading the two feeds back to back is undeniable evidence of privilege and as good as the most eloquent response of writers and pundits.

Unfortunately, no one who really needs to will watch Spike Lee's edit of the Eric Garner video with scenes from Do The Right Thing.  That's too bad, because it's chilling and difficult to watch, but also impossible to watch it and not see that this is just cold-blooded murder.

I hope many more will see the street art response in Ferguson:

Finally, let's remember that when Martin Luther King was assassinated, he was planning the Poor People’s Campaign in Washington, D.C. King wanted to shut down the nation’s capital in the spring of 1968 through massive civil disobedience until the government agreed to abolish poverty. King saw the Memphis sanitation workers’ strike as the beginning of a nonviolent revolution that would redistribute income.  He may have been non-violent, his resistance strategy was designed to make oppression impossible to ignore or avoid. Some believe his murder was part of conspiracy designed to stop him before he could realize his vision.

So let's up the game with the protests and die-ins and general civil disobedience.  Resist.

The image below is by Chip Thomas.

Finding a way to organize politically against the covert and illegal terrorist drone attacks seems impossible, but there are many glimmers of hope over the last year.  First, there is a growing national anti-drone network and the recent CODEPINK No Drone Summit, in the US, but more interesting are recent events in Pakistan.  The Washington Post is reporting today that Pakistan political parties are "outing" high ranking CIA officials as a form of protest against drone attacks and a Pakistani cricket-star-turned-political-leader has organized protest blockades of NATO supply lines that are attracting thousands of Pakistanis. The protestors maintain that drone attacks violate Pakistani sovereignty and are only deepening anti-American sentiment and strengthening the Taliban.

Malala Yousafzai agrees and last month used her audience with President Obama to tell him that "drone attacks are fueling terrorism." and suggests that support for education for young Pakistanis might do a lot more to stop anti-American violence. The brave young anti-taliban activist elaborates in an interview here.  Despite the Malala's pleas, Washington still doesn't seem to be listening.  Incredibly, only 5 members of congress showed up to hear the stirring first hand testimony of this Pakistani family.

Artists are also protesting.  AlJazeera recently profiled a new generation of Pakistani artists who are creatively expressing the effects of violence and drone attacks on the fabric of their culture.  And Mother Jones interviewed another Pakistani artist, Mahwish Chishty, who re-imagined drones as folk art.

The anti-drone art movement in Pakistan is echoed in the West.  An exhibit this past summer at the Corcoran Gallery in Washington DC (a stone's throw from the White House) by James Brindle attempted to expose an American audience to the feeling of being overshadowed by drones, or at least to make the normally unseen seen.  Brindle sees himself as an activist and said "“I’m concerned about the state of the world. There’s no illusions that words and politics and speeches about clean wars and minimizing collateral damages is anything but hot air,”  See his interview with the BBC here.  Brindle also maintains the "Dronestagram" Instagram feed of google earth images of drone-bombed sites.

Instagram seems friendlier to drone activism than Apple.  The "Drone +" iphone app which sends push notifications when a drone strike occurs has been rejected by Apple three times because it "contained content that many audiences would find objectionable."  Creator Josh Begley still maintains the popular twitter account @dronestream tweeting every drone strike and its body count. Twitter is also home to the US Drone War Department, a more satirical take on the drone war. A more graphic representation of the drone body count can be seen here, just in case you have friends that need convincing of exactly how dramatically the Obama administration has ramped up this particular form of terrorism. 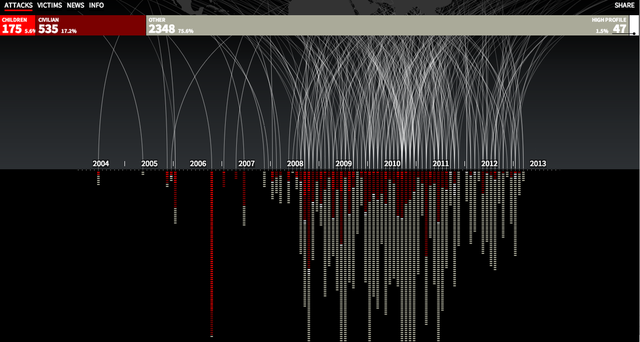 Posted by wj at 6:46 PM No comments: Links to this post

From Syrian artist/photographer Khaled Akil's balcony in Istanbul last night.  All of Istanbul flashing their lights and banging pots and pans in solidarity.  To learn more and take action, go to Amnesty International's page on Turkey solidarity and learn what you can do to support the Turkish demand for freedom and democracy.

Akil knows more than most how precarious basic human rights and the freedom of expression are, having fled his beloved home city of Aleppo less than a year ago.  He talks about the pain of leaving his country behind in chaos here.
Posted by wj at 2:39 PM No comments: Links to this post 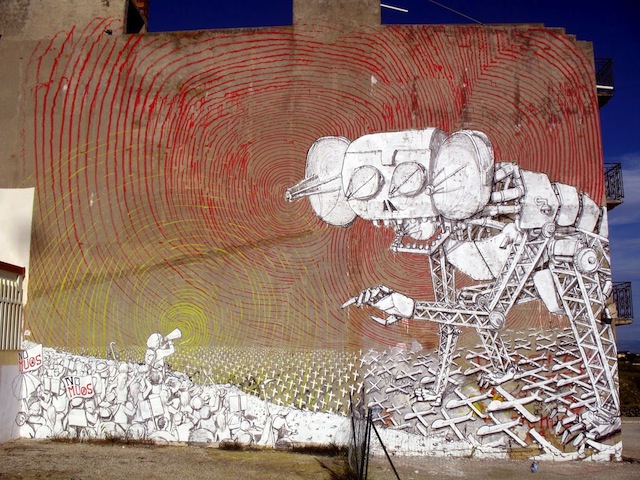 " Blu recently finished two murals in Niscemi, Italy, where residents are protesting the US Navy’s installation of communications satellites which will be integral to controlling the next generation of military drones.

The above piece is one of my favorites from Blu in quite a while. The drones slowly transform into crosses at a graveyard, and the multitudes of Niscemi stand up and resist against the military monster. Besides the ethical concerns about drones, residents are also worried about the electromagnetic waves that the communications satellites will emit. Check out the No MUOS website for more information about the protests."   --from Vandalog
Posted by wj at 4:35 PM No comments: Links to this post

The Daily Beast and Creative Time Reports cover the inspiring story of arts activism and solidarity with supermax prisoners in solitary confinement.   The Tamms supermax prison in Illinois is one of the most notorious in the nation, condemned by Amnesty International for inhumane practices that led to high rates of attempted prisoner suicides and self mutilation.

In response, a group of artists known as the Tamms Poetry Committee came together to educate the public about the atrocities committed there and also to provide the prisoners with human connection and interaction in the form of poems and holiday cards.  One of the artists' initiatives was "photo requests from solitary."  Prisoners on solitary would request photos and professional photographers would then shoot the request and send the photo back.  The gallery of prisoners requests is surprising and poignant.

See the beautiful description of this action by the clever folks at the California Department of Corrections.  According to the Just Seeds blog:

Founded in 1994, the CDC is a private correctional facility that protects the public through the secure management, discipline and rehabilitation of California's advertising. The department was initiated by individuals who felt that public correctional facilities were insufficiently managing the state's most criminal elements and that effective care and treatment would improve under the supervision of a private institution.

For more information on the department’s operations and programs, contact the CDC Office of Communications at cdc@revolutionist.com.

Posted by wj at 9:00 PM No comments: Links to this post

On the Third Anniversary of the Gulf Spill, the Fight is Far from Over.

Human Cost, Tate Britain Performance – First anniversary of the Gulf of Mexico disaster from You and I Films on Vimeo.
Posted by wj at 9:03 AM No comments: Links to this post